In the event that a vehicle needs to be pulled over, for questioning, or to issue a citation, a traffic stop must be initiated. This is done very simply by turning on code one lighting behind the vehicle, and manually sounding the siren behind the vehicle that requires stopping.

The officer should then allow the vehicle to come to a stop in a safe place, and log the plate of the vehicle into ANPR.

The officer should then call into radio the location, make and model of the car, and the reason for stopping, before approaching the vehicle from the safest side.

Use of force policy for compliant individuals should then be adhered to, introducing by name, reasonable grounds and intention.

There will however come times when a vehicle fails to stop. In these cases, sirens should be set to automatic and the vehicle followed at a safe distance.
Radio callouts should be made with the direction of travel, make, model and colour, and reason for stopping. The initiating vehicle will then be considered the primary vehicle - responsible for continuing these directional callouts and requesting stopping methods be put in place.

If additional officers respond in more pursuit capable vehicles, the fastest vehicle will take the role of the primary vehicle.

Under no circumstances should the primary vehicle be overtaken without this being requested. Unmarked vehicles with emergency lighting may assist from a distance using clear communication.

Regardless of the cause for being stopped, a vehicle that flees is guilty of a felony.

The PIT Manoeuvre is a well known stopping technique used to move a vehicle travelling at speed off of a road.

This is done by contacting the rear bumper with an officer’s front bumper. This is a relatively safe method of stopping - effectiveness can be improved with follow up cars behind the primary ready to block further movement of the subject vehicle. An image can be found below. 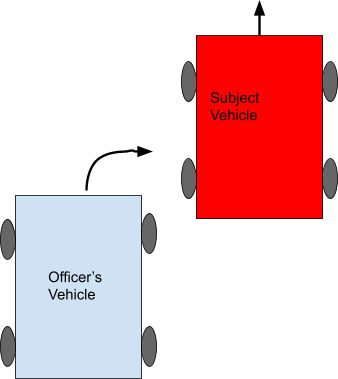 In the case of vehicles fleeing that are known to be armed, a Hard Stop may be more appropriate. This can be done to begin with, or as the third stage of stopping methods.

Ideally, if a wanted or fleeing vehicle is spotted, officers should withhold from turning on sirens until three police vehicles are behind the subject vehicle.

Once these vehicles are in position, a strike order should be given, and all three vehicles should enable sirens and move forward into the hard stop position, slowing in unison to bring the subject to a stop, before surrounding the vehicle with firearms and using tactical communication to order subjects out of their vehicle.

However, if a pursuit is already initiated, this can still be executed as a stage 3 stopping method.

An example of the Hard Stop vehicle positions can be found below. 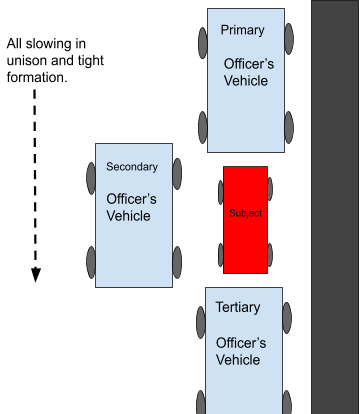 If forceful methods of stopping the subject fail, it may be worth considering respining the wheel and using intelligence supported stopping methods - if a target destination is known, perhaps attempt to place barriers or spike strips between the vehicle and it’s ultimate known destination.

Alternative examples of Intelligence Led stopping methods include restricting the area of travel - by either containing the subject to a single area through the use of roadblocks and spikes, or releasing pursuit altogether and focusing assets on concealing themselves in the destination of the fleeing vehicle.

If procedure was followed for this pursuit, then the number plate of the subject vehicle should already be recorded - warrants can be issued and addresses on record targeted.

There will be occasions where all other attempts to stop a vehicle fail, or the fleeing vehicle causes harm or poses a direct threat to human life. In these cases, permission to use lethal force may be requested and granted from one rank superior to the primary officer.

A distinction must be drawn between the use of firearms - shooting single shots at the tyres of the vehicle - and a Fahrenheit or critical shot authorisation - where automatic fire is used to stop the driver by any means.

The circumstances in which lethal force (Code Red) may be used in a pursuit are as follows:

- The subject vehicle has caused harm to an officer or civilian

- The subject vehicle has posed a direct threat to life to an officer or civilian - driving against traffic, driving into traffic, or driving off road in a populated area.

- All previous stages have been exhausted in stopping the vehicle

- The vehicle is fleeing from an armed felony to gain a tactical advantage - such as from a bank robbery towards a fortified base.

The use of single shots to disable tyres are not subject to these restrictions, but remain a last resort at Stage 5.
Toggle signature